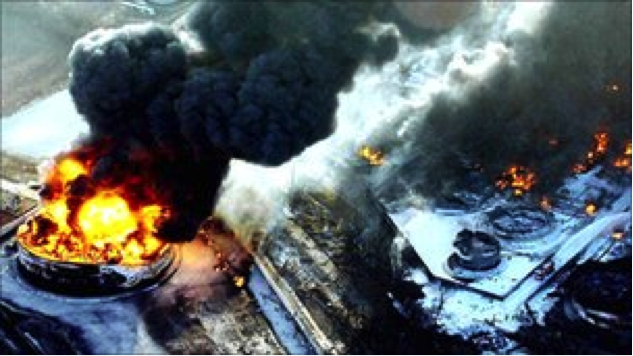 About the oil storage terminal

The Buncefield complex was the fifth largest oil-products storage depot in the UK, with a capacity of about 60,000,000 imperial gallons (270 ML) of fuel. This was about 8% of UK oil storage capacity.

On the night of Saturday 10 December 2005, Tank 912 at the Hertfordshire Oil Storage Limited (HOSL) part of the Buncefield oil storage depot was filling with petrol.

The tank had two forms of level control: a gauge that enabled the employees to monitor the filling operation; and an independent high-level switch (IHLS) which was meant to close down operations automatically if the tank was overfilled. The first gauge stuck and the IHLS was inoperable – there was therefore no means to alert the control room staff that the tank was filling to dangerous levels. By 0537 hrs on 11 December, the level within the tank exceeded its ultimate capacity and petrol started to spill out of vents in the tank roof. 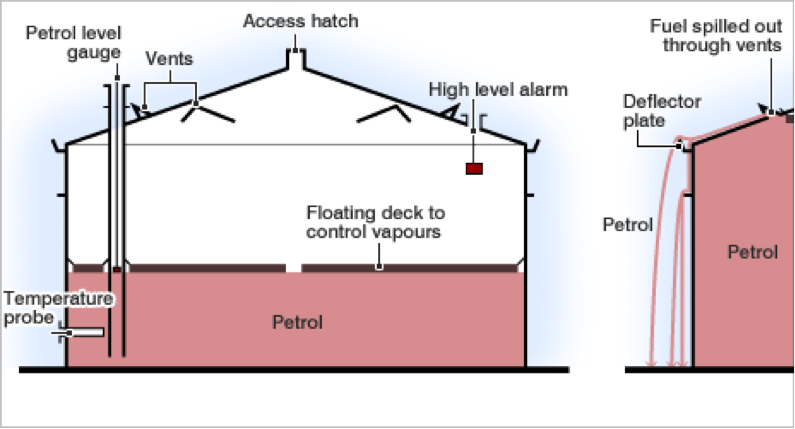 Soon after that a white vapour was seen to emanate from the bund around the tank. In the windless conditions this vapour cloud, which was likely to have been a mixture of hydrocarbons and ice crystals, gradually spread to a diameter of about 360 metres, including areas off the Buncefiield site.

The vapour cloud was noticed by members of the public off site and by tanker drivers on site waiting to fill their vehicles. They alerted employees on site. The fire alarm button was pressed at 0601 hrs, which sounded the alarm and started the firewater pump. A ‘vapour cloud explosion’ occurred almost immediately, probably ignited by a spark caused by the firewater pump starting. By the time the explosion occurred, over 250 000 litres of petrol had escaped from the tank.

The British Geological Survey monitored the event, which measured 2.4 on the Richter Scale. It was reported that people were woken in south London, and as far west as 28 miles (45 km)), where in its southern suburb, numerous people felt the shockwave after the initial explosion. Subsequent explosions occurred at 06:27 and 06:28.

Several nearby office blocks were hit so badly that almost every window, front and back, was blown in as the explosion ripped through them. During the working day, these offices would have been full of people, and many deaths may have resulted.

The emergency services announced a major emergency at 06:08 and a huge fire fighting effort began. At peak times this effort consisted of 25 fire engines, 20 support vehicles and 180 fire fighters. Around 150 firefighters were called immediately to the incident, and began tackling the blaze at 08:20 on the morning of 12 December, putting in containment measures before applying a large quantity of foam. Plans had been in place to start using foam at midnight on 11 December, but were delayed by last-minute concerns over possible pollution of local rivers and underlying water sources.
Half of the 20 individual fires were reported extinguished by midday.

Hundreds of homes in the Hemel Heapstead area were evacuated, and about 2,000 people had to find alternative accommodation; emergency services asked residents of the smoke-affected areas to close their windows and doors and to stay inside.

Seventy-eight schools in Luton were closed on 13 December, along with a limited number of schools in Bedforshire on the advice of Hertfordshire's Health Protection Agency that all schools within a 10-mile (16 km) radius of the incident site should be closed because of concerns surrounding the effect of the smoke plume on children's health. Schools reopened as normal on 14 December.
The incident occurred close to junction 8 of the M1 motorway.The motorway was shut between junctions 12 and 6a—about 18 miles (29 km)—shortly after the incident. Other roads in the vicinity were also closed. Fuel shortages continued for months after the explosion.

Root causes of the loss of containment analysis

What lay behind the immediate cause and subsequent failures of containment?

Tank 912 was fitted with a new independent high-level switch (IHLS) on 1 July 2004. This had been designed, manufactured and supplied by TAV Engineering Ltd. TAV had designed the switch so that some of its functionality could be routinely tested. AV was aware that its switches were used in high-hazard installations and therefore were likely to be safety critical. The design fault could have been eradicated at an early stage if the design changes had been subjected to a rigorous review process. In any event, clear guidance, including instructions about the safety criticality of the padlock, should have been passed on to installers and users. It appears that nobody within Motherwell knew the safety critical significance of the padlock. The IHLS on Tank 912 was installed without the padlock because it seems that Motherwell staff thought it was for security ‘anti-tamper’ purposes only. In addition to the failures of the manufacturers and installers of the IHLS, the site operator did not exercise sufficient oversight of the ordering, installation and testing procedure. While the switch was periodically tested, none of the staff at the HOSL site was aware of the need for the padlock to be replaced so that the test lever was held in the correct position. The site operator should have had greater oversight of safety critical operations and equipment so that they understood fully how it worked, particularly given the expertise available within large oil companies.

Failure of the ATG system was the other immediate cause of the incident. The servo-gauge had stuck (causing the level gauge to ‘flatline’) – and not for the first time. In fact it had stuck 14 times between 31 August 2005, when the tank was returned to service after maintenance, and 11 December 2005. Sometimes supervisors rectified the symptoms of sticking by raising the gauge to its highest position then letting it settle again, a practice known as ‘stowing’.

Prior to the Buncefield incident, petroleum storage sites were generally not considered to be sites where an explosion incident on this scale could occur. Buncefield challenged this worldwide perception. Buncefield Major Incident Investigation Board Publish Recommendations on four main areas :
·        The Design and Operation of Fuel Storage Sites
·        Emergency preparedness and response,
·        Explosion Mechanism,
·        Land Use Planning.
On design and operations at storage sites, the paramount need is for precautions to be in place to prevent fuel escaping from the vessels in which it is contained. Further precautions are needed if fuel does escape, to prevent it forming a flammable vapour and stop pollutants contaminating the environment.

Those recommendations covered a total of 86 sites in England & Wales !