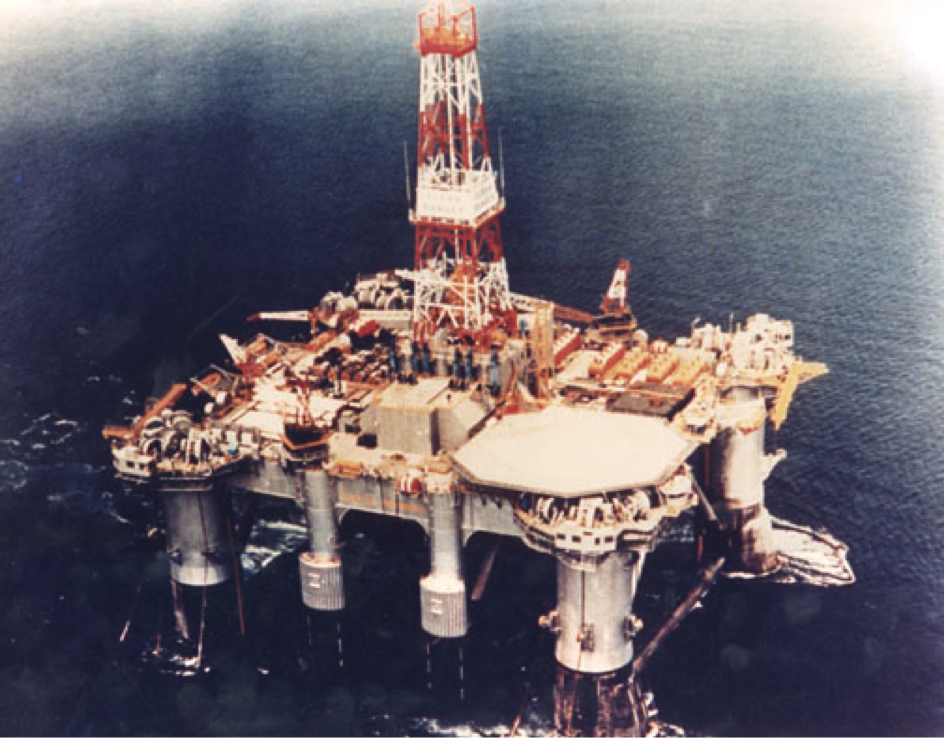 Ocean Ranger was designed and owned by Ocean Drilling and Exploration Company, Inc. (ODECO) of New Orleans. The vessel was a self-propelled large semi-submersible design with a drilling facility and living quarters. It was capable of operation beneath 1,500 feet (460 m) of ocean water and could drill to a maximum depth of 25,000 feet (7,600 m). It was described by ODECO as the world's largest semi-submersible oil rig to date.

The vessel was approved for 'unrestricted ocean operations' and designed to withstand extremely harsh conditions at sea, including 100-knot (190 km/h) winds and 110-foot (34 m) waves. Prior to moving to the Grand Banks area in November 1980, it had operated off the coasts of Alaska, New Jersey and Ireland.Valdez, Alaska to Los Angeles, California, ran aground on Bligh Reef in Prince William Sound, Alaska. The vessel was traveling outside normal shipping lanes in an attempt to avoid ice. Within six hours of the grounding, the Exxon Valdez spilled approximately 10.9 million gallons of its 53 million gallon cargo of Prudhoe Bay crude oil. Eight of the eleven tanks on board were damaged. The oil would eventually impact over 1,100 miles of non-continuous coastline in Alaska, making the Exxon Valdez one of the largest oil spill in U.S. waters.

On 26 November 1981, the Ocean Ranger commenced drilling well J-34, its third well in the Hibernia Oil Field. The Ocean Ranger was still working on this well in February 1982 when the sinking occurred. Two other semi-submersible rigs were also drilling nearby: the Sedco 706, 8.5 miles (13.7 km) NNE, and the Zapata Ugland, 19.2 miles (30.9 km) N of the Ocean Ranger.

On 14 February 1982, the rigs received reports of an approaching storm linked to a major Atlantic cyclone from NORDCO Ltd, the company responsible for issuing offshore weather forecasts. The usual method of preparing for bad weather involved hanging-off the drillpipe at the sub-sea wellhead and disconnecting the riser from the sub-sea stack. Due to surface difficulties and the speed at which the storm developed, the crew of the Ocean Ranger were forced to shear the drillpipe after hanging-off, after which they disconnected the riser in the early evening. 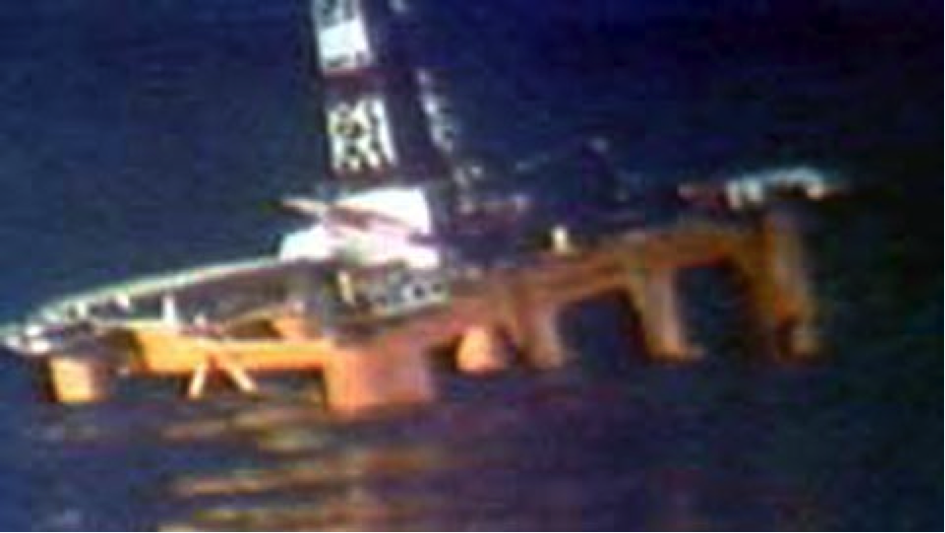 One of the few pictures of Ocean Ranger’s sinking
(Source: Radio Canada)

At about 7 p.m (local time), the nearby Sedco 706 experienced a large, powerful wave which damaged some items on deck and caused the loss of a life raft. Soon after, radio transmissions were heard from the Ocean Ranger, describing a broken portlight (a porthole window) and water in the ballast control room, with discussions on how best to repair the damage. The Ocean Ranger reported experiencing storm seas of 55 feet, with the odd wave up to 65 feet, thus leaving the unprotected portlight at 28 feet above mean sea level vulnerable to wave damage. Some time after 2100 hours, radio conversations originating on the Ocean Ranger were heard on the Sedco 706 and Zapata Ugland, noting that valves on the Ocean Ranger's ballast control panel appeared to be opening and closing of their own accord. The radio conversations also discussed the 100-knot (190 km/h) winds and waves up to 65 feet (20 m) high. Through the remainder of the evening, routine radio traffic passed between the Ocean Ranger, its neighbouring rigs and their individual support boats. Nothing out of the ordinary was noted.

At 00h52 (local time), on 15 February, a MAYDAY call was sent out from the Ocean Ranger, noting a severe list to the port side of the rig and requesting immediate assistance. This was the first communication from the Ocean Ranger identifying a major problem. The standby vessel, the M/V Seaforth Highlander, was requested to come in close as countermeasures against the 10-15 degree list were proving ineffective. The onshore MOCAN supervisor was notified of the situation, and the Canadian Coast Guard and Mobil-operated helicopters were alerted just after 0100 hours local time. The M/V Boltentor and the M/V Nordertor, the standby boats of the Sedco 706 and the Zapata Ugland respectively, were also dispatched to the Ocean Ranger to provide assistance. At 0130 hours local time, the Ocean Ranger transmitted its last message: 'There will be no further radio communications from the Ocean Ranger. We are going to lifeboat stations'. Shortly thereafter, in the middle of the night and in the midst of atrocious winter weather, the crew abandoned the rig. The rig remained afloat for another 90 minutes, sinking between 0307 and 0313 hours local time.

Whilst the rig was provided with an Emergency Procedures Manual which detailed evacuation procedures, it is unclear how effectively the rig evacuation was carried out. There is evidence that at least one lifeboat was successfully launched with up to 36 crew inside, and witnesses on the M/V Seaforth Highlander reported seeing at least 20 crew members in the water at the same time, suggesting that at least 56 crew successfully evacuated the rig. The United States Coast Guard report speculated that 'these men either chose to enter the water directly or were thrown into the water as a result of unsuccessful lifesaving equipment launching'. Rescue attempts by the standby vessels were hampered by the adverse weather conditions and the conclusion that the standby boats were neither equipped nor configured to rescue casualties from a cold sea. As a result of the severe weather, the first helicopter did not arrive on scene until 0430 hours local time, by which time most if not all of the Ocean Ranger's crew had succumbed to hypothermia and drowned. Over the next week, 22 bodies were recovered from the North Atlantic. Autopsies indicated that those men had died as a result of drowning while in a hypothermic state.

The remains of the rig itself were found by sonar search over the following weeks, resting in an inverted position approximately 485 feet south-east of the wellhead, surrounded by major items of debris such as the derrick. The rig had capsized bow-first, turning over and striking the sea floor with the forward ends of the rig's pontoons.

The Canadian Royal Commission spent two years looking into the disaster. The commission concluded that the Ocean Ranger had design and construction flaws, particularly in the ballast control room, and that the crew lacked proper safety training, survival suits and equipment. There was no suggestion that it was caused by a rogue wave, as some recent articles have suggested. The Canadian Royal Commission also concluded that inspection and regulation by United States and Canadian government agencies was ineffective.


·      "The Report of the Royal Commission (Canada) on the Ocean Ranger Marine Disaster". Ottawa: Canadian Government Publishing Centre. 1984.
Posted by Unknown at 7:50 AM