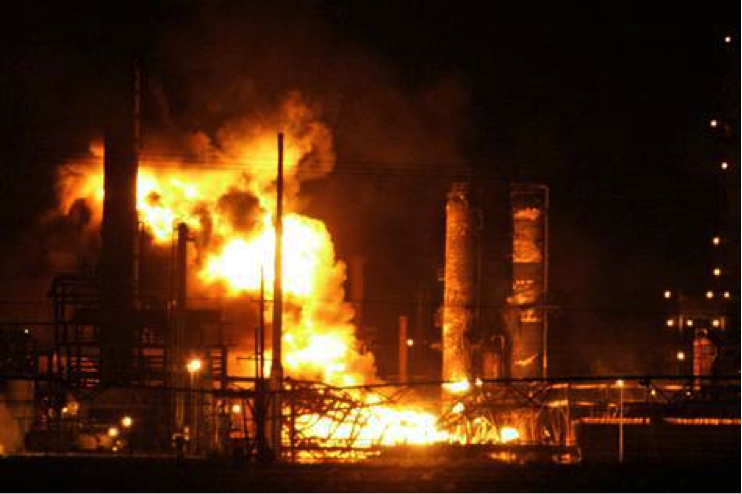 5h45 p.m. :               Vapor leak was noticed on a Vessel
About the Vessel :
- Amine absorber removing H2S from acid stream
- 55 foot tall, one-inch thick carbon steel (34-tonne storage)
- Pressured
Refinery workers, including the outside operator and an assistant outside operator, unsuccessfully attempted to by-pass the vessel and to depressurize it.

This explosion engulfed much of the refinery in flames.

As a result of the explosion, many towers, tanks, and other refinery structures began to rupture or collapse and the site’s fire hydrant system was damaged. So firefighers were forced to draft water from a nearby sanitary canal.

They were just beginning to attack the flames when a tank containing liquefied petroleum gas erupted. The explosion created a huge fireball that rose thousands of feet into the air. Several members of the Union Oil Fire Brigade were caught in the blast. Later reports stated that the explosion was felt fifteen miles away.  Local residents recalled seeing a “bright mushroom cloud” emanating from the facility and a very powerfull blast.

The enormity of the fire brought mutual aid fire apparatus and ambulances from more than 30 cities, including two medical evacuation helicopters from the University of Chicago Hospital and a Chicago Fire Department fireboat sent via the sanitary canal. An AMOCO refinery in Indiana even sent truckloads of Aqueous Film-Forming Foam (AFFF) to help extinguish the fire.

Firefighters were needed to both put out the flames and also prevent more refinery structures from catching fire. Once the burning structures were isolated, fire officials determined that allowing the fires to burn out on their own was the safest way to extinguish the blaze. The fires burned throughout the night at temperatures of 2,200 °C, luckily without further explosions or loss of life, even though some workers jumped into the Illinois & Michigan Canal to escape the extreme heat.`

As required by law, the inside of the vessel was inspected every two years. The inspectors were Union Oil employees in management positions. The vessel was last inspected three months before the explosion and the vessel inspectors found no problems with the vessel. Testimony from one of Union Oil’s own engineers indicated that his metallurgical testing performed after the explosion indicated that there were cracks in the vessel walls at least four years before the accident. The plaintiff’s evidence established that Union Oil’s vessel inspectors made only a visual inspection which was inadequate to detect cracking within the vessel walls. The evidence indicated that Ultrasonic and wet magnetic particle testing techniques were well known and used in the oil industry to detect vessel wall cracking, but Union Oil did not use them on this vessel. 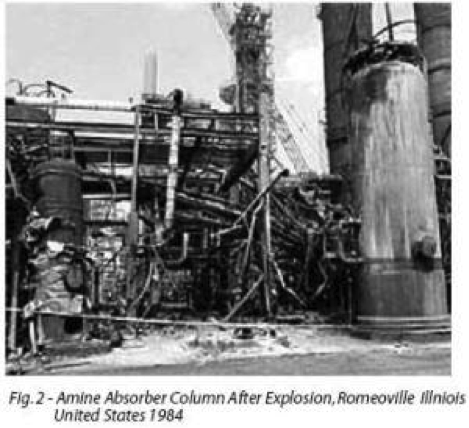 Three other primary contributors to the settlement, Santa Fe Braun, Inc., UOP, Inc., and the Ralph M. Parsons Company, had responsibilities relating to the erection, process design and functioning of this vessel. One of Santa Fe Braun’s corporate predecessors, C.F. Braun and Company, was the general contracting firm that erected the vessel. Its engineers helped to determine the process requirements and capabilities of this vessel, specifically including what amount of chemical activity would go on within the vessel. UOP was also involved in those decisions, made with respect to process engineering. The Ralph M. Parsons Company has been hired by Union Oil to revamp part of the refinery, including the subject vessel. In its revamp, Parsons altered some of the process requirements of that vessel, and as well, made independent determinations of the suitability of the vessel and its characteristics for use in the amine treating system. The Union Oil Compagny alleged that the process design work done by these three companies was inadequate in that it failed to provide for sufficient safeguarding against corrosion which contributed to the cracking and the failure of the vessel.
Union Oil determined that the operation of the subject vessel had caused significant metallurgical problems to the bottom portion of the vessel and that one of the vessel sections would need to be replaced. Welders from the Morrison Construction Company attempted to replace a major section of the vessel but due to poor quality control and inadequate welding work, were taken off the job by Union Oil and replaced by welders from the Nooter Corporation. Nooter’s welders finished the job using specifications which the Union Oil Compagny claimed were inadequate. The welding specifications used by Morrison and Nooter contributed to the "high hardness" of the metal adjacent to the weld, which made it more brittle and subject to failure. 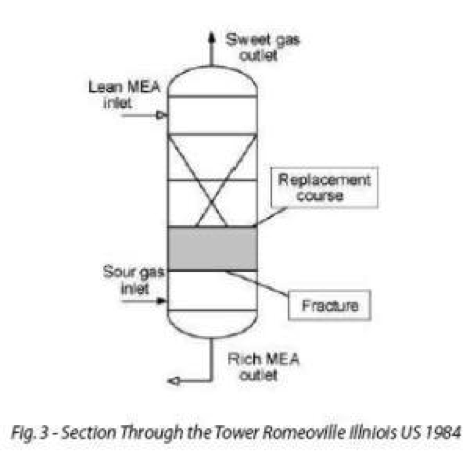 
https://www.osha.gov/pls/oshaweb/owadisp.show_document?p_table=INTERPRETATIONS&p_id=19415
Posted by Unknown at 6:07 AM