What happened: Four workers were killed in a fiery accident. The men were in the process of replacing corroded pipes at one of the refinery’s oil fractionators

Causes: The project was classified as low-risk routine maintenance, no special precautions were in place. The fractionator continued to operate, with large volumes of flammable vapor and liquid flowing inside the tower and its attached piping 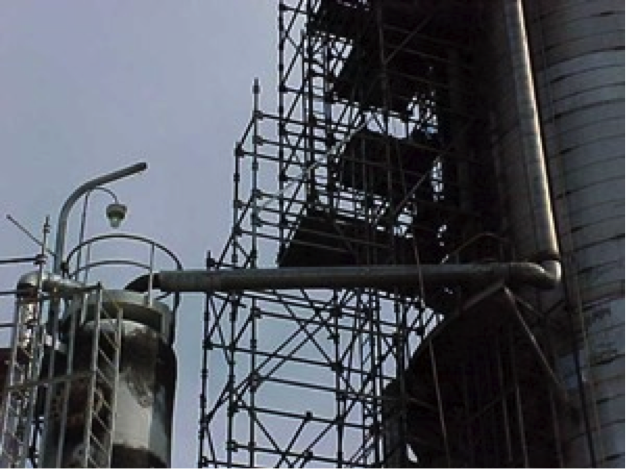 Earlier that morning, under the direction of a Tosco maintenance supervisor, workers had removed a section of corroded naphtha piping 112 feet up the tower, near where the piping joined the fractionator. But things had not been going as planned. When a second cut was made 26 feet below the first, petroleum naphtha – a volatile hydrocarbon mixture that ignites spontaneously at 232°C – began to ooze out and workers had to immediately reseal the pipe.
After breaking for lunch, the workers climbed 40 to 100 feet up scaffolding alongside the tower. They tried to drain the piping system of naphtha by opening a pipe flange 36 feet up and directing the leaking fuel into a vacuum truck using makeshift plastic sheeting and a bucket.
The operation proceeded without apparent problem for 30 minutes, when suddenly a large volume of naphtha, propelled by vapor pressure from the operating fractionator, shot out of the open pipe overhead, spraying the workers. For the five men high on the scaffold, there were few avenues of escape as the hot surface of the fractionator ignited the naphtha, engulfing them in flames.
Although emergency teams arrived quickly, no one could approach the victims for 20 minutes because of the fire. One man died at the scene, three died at the hospital and another, who had thrown himself off the scaffolding to escape the flames, survived with critical injuries.

The Chemical Safety Board investigated the accident, Tosco’s second in two years, to determine root causes. Almost two weeks before the accident, on February 10, operators had observed a naphtha leak coming off the fractionator, which they treated as an emergency at the time. Workers located a pinhole leak in the naphtha piping 112 feet up and closed a series of valves in an effort to eliminate it. But the leaks kept recurring. In succeeding days, one attempt after another failed to completely staunch the flow of naphtha. Shut-off valves malfunctioned repeatedly, and drain valves were found to be clogged beyond use or repair.
Ultrasound and X-ray tests were ordered, and these revealed that both the piping and the valves were severely corroded and needed to be replaced. Although the unit operator argued for shutting down the process before attempting to replace the deteriorated piping, a maintenance supervisor decided to do the job while the hot fractionator continued to run. This fateful decision did not receive any oversight or scrutiny from the facility’s management.

Process should have been shut down

In the 13 days that elapsed between the first occurrence of the leak and the fatal accident, Tosco personnel missed numerous opportunities to reassess the hazards of the pipe replacement work and take measures to ensure the work would be performed safely. In this case, such safety measures would have included shutting down the fractionator as the only way to eliminate both the source of the naphtha and the potential sources of its ignition.
Avon did not have a systematic job planning and authorization process to ensure that this kind of maintenance work received appropriate scrutiny before going forward. No formal hazard evaluation was conducted before or during the maintenance project, and managers and safety specialists were not sufficiently involved in decision-making and oversight. Instead, individual workers were given the authority to put a halt to unsafe work.

Corrosion, management of change of programs

The naphtha piping and valves had been run to the point of breakdown due to corrosion, leading to a potentially hazardous situation. The valves and piping had corroded at an excessive rate because an upstream vessel known as the crude oil desalter was being operated beyond its design lim- its. Tosco had routinely processed excessive volumes of crude oil with high water content, overtaxing the desalter.
As a result, water and corrosive materials like ammonium chloride were carried over into the fractionator, where they began to deteriorate the piping and valves.

The CSB recommended that Tosco conduct periodic safety audits of its refineries and document all findings in writing. The CSB said audits should examine the conduct of hazardous non-routine maintenance, the role of management in overseeing safety, and the corrosion control and management of change programs. Audit findings and recommendations should be shared with the workforce and tracked to completion.

The Board recommended that the refinery, implement a program to ensure that hazardous non-routine maintenance is conducted safely. The refinery should require a written hazard evaluation by a multidisciplinary team before any hazardous job is started. The refinery should also require higher levels of approval for higher hazard jobs, develop a written protocol for making shutdown decisions, and make sure that managers and safety officials provide adequate oversight for hazardous work.
The Board also recommended that the refinery improve its management of change and corrosion control programs to prevent situations where safety is compromised.