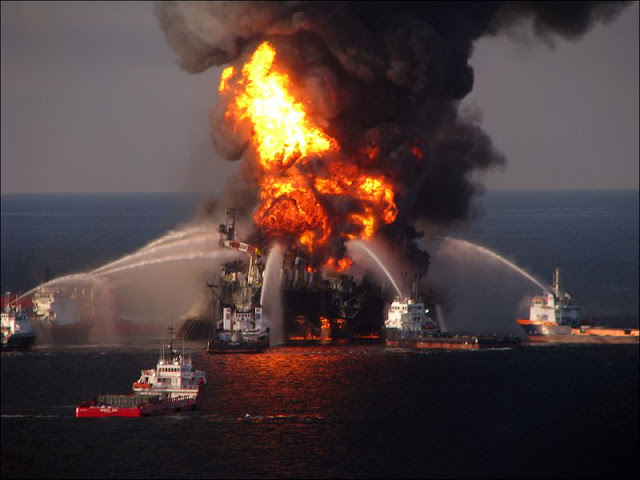 Date : April 20, 2010
Place : Gulf of Mexico, USA
Type of accident : Oil spill due to a well blowout
Outcome : 11 people killed (essentially workers), major damage to the environment (over 20 endangered species by the oil spill , mutated animals…) and to the economy.

In March 2008, BP paid over $30 million to the Minerals Management Service (an agency of the United States Department of the Interior that manages natural gas, oil and other mineral resources in the country) for an exclusive lease to drill in the Gulf of Mexico: BP would be the first company to drill a reservoir in Mississippi Canyon Block 252. Even though BP had little knowledge on the geology, it thought –based on available geological data it had – that it might find an oil and gas reservoir that would warrant installing production equipment at the well. At that time, BP would have hoped a bright future with a well capable of generating a large profit.
More than two years, however, BP found itself paying out billions of dollars to contain a blowout at the well, mitigate the damage caused by the millions of gallons of oil flowing from that well into the Gulf of Mexico, and compensate the hundreds of thousands of individuals and businesses harmed by the spill. And we are not even talking about the fact that BP, along with its partners and key contractors (Halliburton and Transocean) face potential liability for the billions more necessary to clean and restore natural resources harmed by the spill.

Before going further on the accident, we need to know the different steps in drilling operations. Oil forms deep beneath the Earth’s surface when organic materials deposited in ancient sediments. Under intense temperature and pressure, these materials “cook” into liquid and gaseous hydrocarbons. Hydrocarbons tend to go upward, flowing through porous mineral layers, until it encounters an impermeable layer that will block the way. The hydrocarbons will be gathered in porous rock beneath the impermeable layer. Therefore, drilling for oil consists of finding and tapping these “pay zones” of porous hydrocarbon-filled rock.

The principal challenge in deepwater drilling is to drill a path to the pay zone in a manner that we can control the enormous pressure inside the reservoir exerted by the weight of the rocks above the pay zone and avoid the fracturation of the geologic formation in which the reservoir is found. During the drilling, the crew balances this pressure by injecting a sophisticated blend of synthetic fluids, polymers and weighting agents which is recognized in the business of drilling by the sweet name of “drilling mud”. If the mud weight is too low, the hydrocarbons will go towards the well (causing a “kick”), and a discharge from the well itself as the oil and gas rush up and out of the well (a “blowout”) . But if the weight is too high, it can fracture the surrounding rock, leading to leakages of the drilling mud into the formation.

As the well deepens, the crew lines its walls with a series of steel tubes called casing. The casing creates a foundation for continued drilling by reinforcing upper portions of the hole as drilling progresses, thus protecting more fragile sections of the well structure from the overwhelming pressure. To secure this casing and to make it still, crews pump in cement to seal the space between the casing and the wellbore. The BOP is also used in drilling operations, as all the materials stated above pass through the BOP. 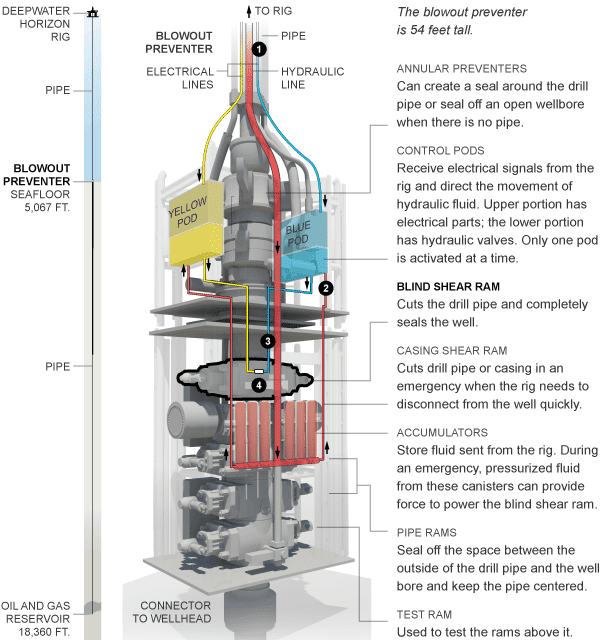 BOP, the latest line of defense

Designed and used properly, these devices work together to enable pressure control in the well. If a failure happens, a system of valves located upstream the well called blowout preventer (aka BOP) is able to seal off the well. The BOP regroups rams and annular preventers that are able to shut down the well.

When oil hits the fan…

The Deepwater Horizon was a floating semi-submersible drilling unit that relied on thrusters and satellite-positioning technology to stay in place over the well. It was capable of performing drilling to depths up to 9000m. It was owned by Transocean, a leading owner of deepwater drilling rigs, which was contracted by BP to do the physical work of drilling the well. Before the accident, Transocean had a good reputation in safety, with no major incidents during the previous 7 years.

However, as all good things come to an end sooner or later, this pristine record would be soiled by an oil gusher. On the evening of April 20, 2010, great amounts of drilling mud began spewing onto the decks, causing huge vibrations along the rig. The crews realized that a kick had occurred and took immediate action to assess the problem (shutting the well in using the BOP, routing the oncoming flow into a mud-gas separator), but it was already too late. Huge amounts of gas had already managed to pass through the BOP, easily overwhelming the mud-gas separation system. The gas accumulated in the rig caused a series of explosions, followed by a fire that engulfed the platform and taking the lives of 11 workers who were struggling to stop the blowout.

With the explosion, the Deepwater Horizon lost all primary and backup power generation ability. In addition, critical emergency control equipment was damaged and could not be used: the rig’s EDS (Emergency Disconnect System), which was supposed to disconnect the rig from the BOP, could not be activated, allowing continuous flow of oil and gas to feed the fire. The evacuation of survivors occurred in Titanic-like conditions, as many of the personnel left onboard had to jump overboard to escape amid the confusion on the bridge and lack of orders from the directing personnel.

The Deepwater Horizon sank two days later, collapsing the marine riser connecting the rig and the well and releasing immense amounts of hydrocarbons into the waters. In order to mitigate surface damage caused by the buoyant oil on wetlands, beaches and communities present in the Gulf of Mexico, huge amounts (over 7000 m3) of dispersant were used. However, it was revealed further that these agents are toxic, thus increasing the damage done by the environment. This deadly mixture was transported by subsea and surface currents to all parts of Gulf of Mexico.

Three months after the explosion, multiple attempts were made to control the blowout: use of remotely operating vehicles to turn on the BOP manually, use of containment domes to isolate leaking pipes and pumping heavy fluids into the well to “kill” it. But all to no avail. BP managed to permanently close the well on September 19 by injecting drilling mud and cement to close the wellhead. 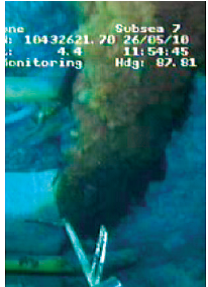 All in all, the Macondo disaster is labeled as the biggest oil spill in the history of the petroleum industry, with extensive damage done to the environment (presence of dead zones in the Gulf, mutated fish caused by the use of dispersants) and the economy of the zone (fisheries, tourism).

It is clear that the immediate cause of the oil spill was a failure to contain hydrocarbon pressures in the well, caused by the product of several individual missteps and oversights by BP and its contractors.

This compilation of technical errors is deeply rooted to a blatant failure of management and communication within BP and its contractors. The following points sum up the lack of decision-making and anticipation capacities by BP:

• Incapability of adequately identify or address risks created by changes in the design : Changes to well design are normally subject to a management of chance process. At the Deepwater Horizon, many change decisions were made by the BP crew located in the platform, without any formal risk analysis or review conducted by the expert. The most obvious example would be the decision of using fewer centralizers than the amount recommended by Halliburton. BP’s overall approach is very well conveyed by this sentence, present in an e-mail exchange between two BP engineers about the centralizers: “But, who cares, it’s done, end of story, we will probably be fine and we’ll get a good cementing job.”

• Lack of knowledge on security tests: the negative-pressure test, a very important test which evaluates the integrity of the well, was conducted and interpreted improperly. The BP personal failed to realize that pressure data showed repeatedly that hydrocarbons were already flowing into the well. This could have been used to show that the cementing phase was a failure and could have prevented the accident.

• Failure of communication: BP did not share important information with its contractors and internally even with members of its own team. As a result, critical decisions were taken without a full appreciation for the context in which they were being made.

• Failure of quantifying and risks created by time and money-saving decisions: many decisions taken by BP, such as not using the recommended amounts of centralizers, not waiting for the analysis of cement foam stability test, and the removal of the mud barrier from the riser before setting any barrier in the production casing, had increased the risk of the oil spill.

With all these factors at hand, one can easily assume that BP’s organizations and operating teams did not possess a functional culture, or rather; the BP’s system forgot to be afraid. This is clearly shown by the lack of a rapid learning security culture that had the willingness to carefully analyze all other major disasters that have been experienced by the offshore oil and gas industry: the turn of events of the North Sea Piper Alpha platform explosion in 1988 and the sinking of Petrobras P36 platform in 2005 are very similar to that of the Deepwater Horizon oil spill. This disaster has also creepy similarities with BP Texas City disaster, including unawareness of risks and absence of management of change. 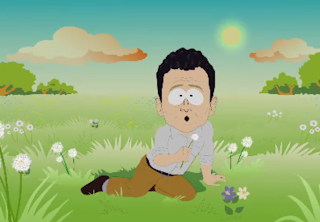 This disaster also brought up the inability of the American governance to be on line with projects and developments associated with hazardous hydrocarbon exploration and production. The MMS (Minerals Management Service) was chronically underfunded, understaffed and suffered internal conflicts in its leasing, validation and enforcement activities. The MMS approved the BP’s initial exploration plan, in which it was stated that a blowout accident was unlikely and a scenario for a potential blowout was deemed not necessary… These conflicts have been recognized and hopefully, the new Department of Interior’s Bureau of Ocean Energy, Management, Regulation and Enforcement (BOEMRE) will be able to realize its short and long-term objectives.

The extensive media coverage of this disaster will undoubtedly worsen not only BP’s reputation (the several apologetic messages delivered by Tony Hayward will not make things better…), but also the already fragile reputation of oil and gas industry as well. It will raise several doubts regarding the feasibility of drilling in ultra-deep waters, as these operations involve risks much greater than generally recognized. It is up to the different actors of the oil and gas industry (companies and governments alike) to find the necessary answers to carry on these activities with no harm to the environment.