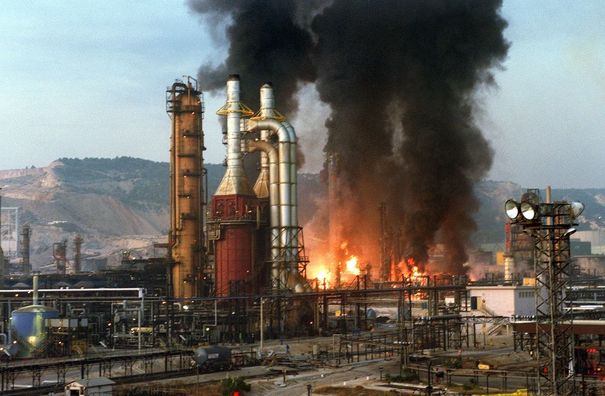 View of the fire during the accident (source: AFP)

At 05:20 on the morning of November 9, a major explosion occurred at the FCCU (Fluid catalytic cracking unit) at Total’s La Mede refinery, in southern France.
Six operators were killed, three of whom were in the control room, which collapsed. Three others were seriously injured.
Little contamination of the environment was reported as most of the water used to extinguish the fires was collected and treated and the superficial contamination of the lake was contained. No air contamination was measured.
The FCCU and surrounding process units were severely damaged, resulting in the whole refinery being shut down for several months, with the FCCU taking a year to rebuild. Damage to property was reported in the town of Martigues, 4.5 km (almost 3 miles) away. The total cost of the incident was around $600 million. 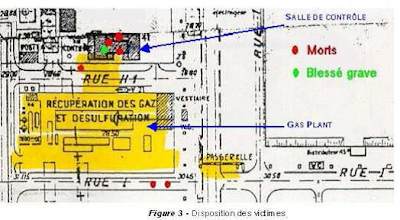 The incident arose from a release of about 15 tons of hydrocarbons when a hole of about 25 cm² in area, created through corrosion, suddenly appeared in a 200 mm absorber stripper reflux cooler bypass line. The release occurred over about 10 minutes creating a large vapor cloud of 14 000m², which engulfed other process units.

Hole in the bypass line

When the cloud ignited, after touching the heater 100m away, the resulting overpressure caused massive damage to the plant and equipment and collapsed the roof on the process control room, killing 3 of the occupants and injured the others.
A massive fire created a major domino effect that led to further loss of containment and escalation. In addition to the FCCU gas recovery plant, four main areas were affected: a main pipe rack, a building containing a turbine generator, a 2500 m3 spent caustic soda tank containing a layer of light hydrocarbon, and a 5000 m3 fuel oil tank.
Although the fires in the turbine building and tankage were quickly extinguished, other areas were allowed to burn under control for 3 days until their sources of fuel were exhausted.
The control room was built in 1953, and had not been retrospectively blast protected.

An expert witness claimed that the corrosion was foreseeable; leading to the conclusion that management and maintenance were negligent.
In April 2002, a court found the then-President of Total guilty of involuntary manslaughter and sentenced him to a suspended sentence of 18 months in prison and a fine of 4500€. Two inspection managers (18 months suspended and 2500€), two plant inspectors (4 months suspended and 1500€) were also sentenced.

Finally, as in a lot of accidents, a combination of multiple factors leads to this terrible ending. We propose here a list of lessons to be learned from this accident:
-
Build a blastproof control room, resistant to shock waves, and locate it far from sensitive units.
Reinforce regulations about construction and control of pipes and their accessories.
Keep enough space between units to avoid any domino effect and to allow easier access to emergency services.
Increase the number of gas detectors, positioned as close as possible to potential source of leakage to figure out the presence of gas faster.
Install numerous sprinkler systems water systems in “sensitive” areas to cool them down in case of fire in the unit.
Automate safety and security systems as far as possible.